@$24551: What The Sanctioning Of Tornado Cash Means For Bitcoin 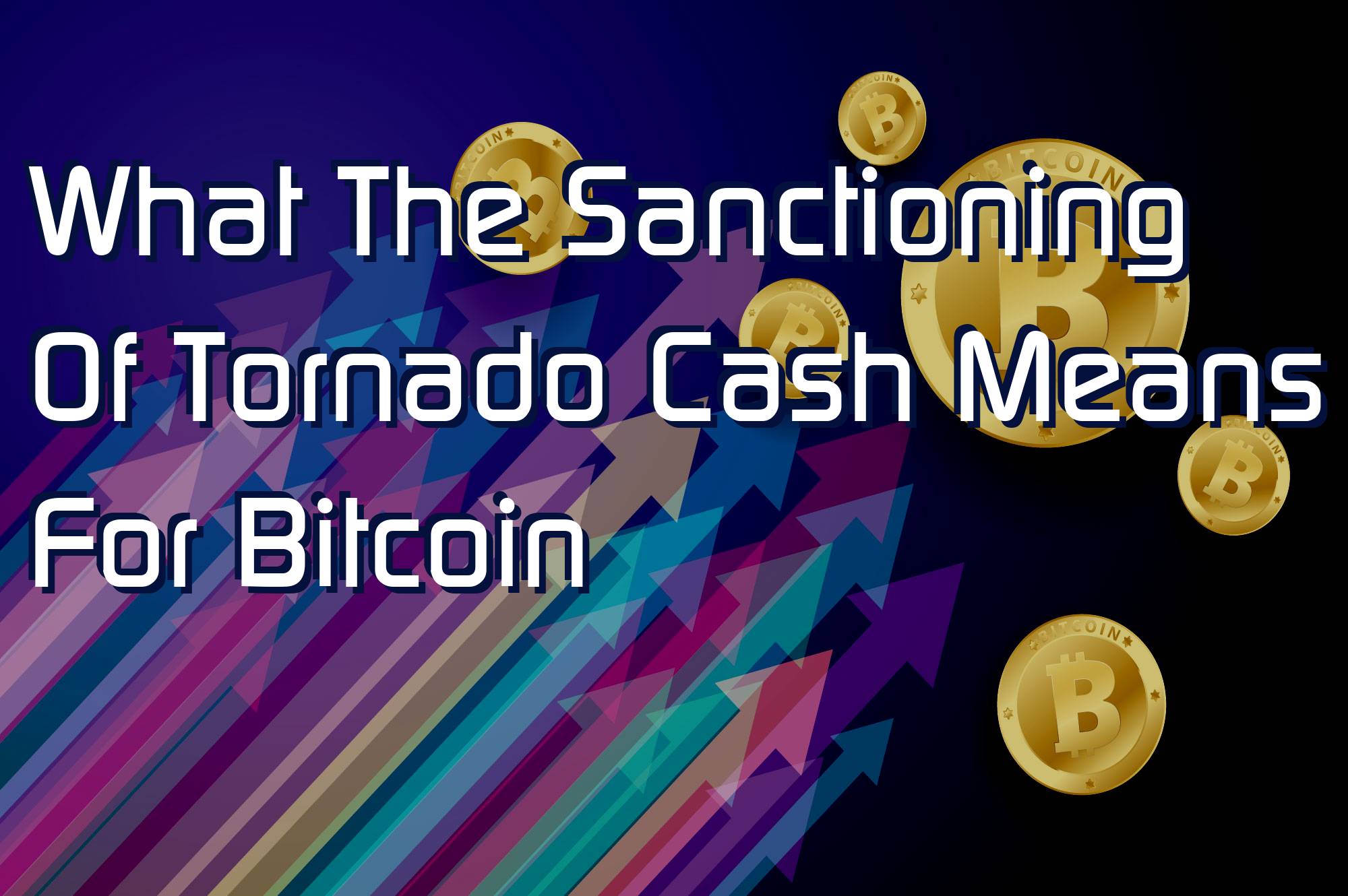 What Ethereum’s Tornado Cash protocol being blacklisted by the government means for Bitcoin, and how to read the consumer price index print.

This is a transcribed excerpt of the “Bitcoin Magazine Podcast,” hosted by P and Q. In this episode, they are joined by Dylan LeClair and Sam Rule to talk about the recent Tornado Cash sanctions by the U.S. Treasury.

Dylan LeClair: Tornado cash is an open-source, Ethereum mixing wallet, like Samourai Wallet or Wasabi (which has already started to become OFAC compliant and blacklisting certain addresses). These are just ultimately a collaborative bitcoin transaction. People call it a coin-mixing solution or whatever they try to call it to try to criminalize it. It’s just a bitcoin transaction; it’s just a collaborative spend. That’s just information. You could make an argument that it’s against free speech in a way, but the State’s not gonna really accept that.

It’s just not a good precedent. The founder, who is just a builder of software is getting potentially canceled because he created something that the U.S government didn’t like and they blamed Korea.

It was pretty ridiculous, but just a pretty important day, in general, and not great for the privacy movement, in general, but we’ve known it’s been coming. We’ve known that it was just a matter of time.

Q: I wanna play devil’s advocate. I’m not asking this question because I think any action is justified, I am just a vehicle to share a different idea. Let’s ignore the Tornado Cash, but let’s say this actually happened to Do Kwon or Mashinsky. Would your feelings be different?

LeClair: Let’s distinguish a fraud, Alex Masinsky, and think what you want about whether Do Kwon was building something in earnest or knew it was all a Ponzi all along. I’m not gonna make that call here. But in terms of what Alex Masinsky and Celsius did, it was fraudulent, so it’s different than someone who’s building software. It’s non-custodial, like Tornado Cash is a non-custodial Ethereum mixer. You send in a transaction — I don’t even know the exact technicals as well as I do with bitcoin and mixing — but you send in eth and it’s a smart contract that executes and mixes it up and you can’t tell what’s the input and what’s the output is the base of it. Sorry if I bundled the response a little. The founder or the creator of this software, Roman Semenov, doesn’t actually touch the eth. There’s this really petty eth versus bitcoin flame war going on, where all this hype around the merge and potentially the .eth Twitter cult will go against the Bitcoin Maximalist Twitter cult. It’s all pretty dumb and I think it’s missing the bigger point that a clamp down is coming.

Whether Ethereum has its merits or is riding on the backs of Bitcoin is anybody’s judge. I align probably more with the Bitcoin Maximalist viewpoint. Screeching that everything’s a scam over the past decade hasn’t really served anyone well or protected anybody. People still go for the scams and so maybe we Bitcoiners should fine tune our message a little bit. Even though I’m pretty bearish on all the other altcoins against Bitcoin over the next year, five years, 10 years.

I think Ethereum is tremendously overvalued at 50% of bitcoin’s market cap, but I think that calling for more regulation into the labeling of Ethereum as a security is just probably the wrong way to go about it. To keep bringing it back here.

Sam Rule: To go back to your question, is it justified if it was some fraudulent activity or Mashinsky or something like that they’re shutting down. I guess it doesn’t really matter. If you do it for one, you’re gonna constantly find the gray area to do it more and more. It just gets back to the point that it’s just two different systems completely and are always gonna be because stablecoin are gonna be larger centralized issuers, no matter what chain, whether it’s Tron or Ethereum that they’re on, they’re gonna run into those issues. They still operate. Stablecoins by definition are a blockchain, dollar version of the financial system that we have today.

I don’t think it really matters in terms of punishment, whether it’s illegal activity or not. Now, when you think in Bitcoin terms and the innovation, what it’s meant to be is that, that you’re gonna have so many conversations. If Bitcoin is successful over the years and has so many issues with trying to shut down rails for all sorts of reasons from the system that the United States has had or where the Western world really has had very strong financial control over that. They’re gonna be losing that power, essentially. They’re not gonna be wanting to give that up in any such way.

Again, it’s just like one, probably very small example, whether I think it was North Korean money laundering, that’s gonna come up and probably many are gonna fight and say, that’s very justifiable to shut that down. It just goes back to the censorship-resistant capabilities of all this and what’s truly censorship resistant and when Bitcoin grows and it scales in these situations, is it gonna prove that it’s really truly censorship resistant? To me, that’s probably the largest risk: How much influence over governments and businesses between blacklisting addresses and trying to shut down some sort of circular economy, how much are they gonna be able to do? How much are the tools on Bitcoin gonna be able to withstand that?

LeClair: I think on this note, it’s pretty interesting. All of the macro craziness we’ve seen over the last year, I’m not just talking about like financially, but the geopolitical tension that’s increasingly being built with the United States and China and all of the sanctioning of Treasury reserves. We’re a long way away from bitcoin being anything from a shortfall asset, a 24/7/365 inverse VIX. S&P ticks down or up, bitcoin is beta on that and it’s just this reflection of the liquidity tied and all that extra speculation sloshing around.

If we do reach this point of bitcoin at $500,000 and it’s equivalent to gold, even bigger than that, bitcoin becomes liquid enough. It becomes the enemy of monies, but not at a level of drug dealers and small speculators, like it was in 2011 and it is now in 2022, but in say however long it takes, it’s gonna be liquid enough for adversarial nations to hold it in their reserves as a treasury [asset].

Bitcoin mining and the reality of the game theory of digital money and “not your keys, not your coins” at nation-state levels. It’s like, it’s not your system. And ultimately, I think the game theory of bitcoin long term is that people, institutions and eventually sovereigns are gonna opt into something where they have the rules in their favor. Whether it’s absolute scarcity, rising production cost and you get to decide that there’s no more than 21 million coins by running your own software. The bet on bitcoin is the bet that people converge upon that because there’s no other alternative. You can’t use USDC and you can’t use USTs (U.S. Treasuries) if you’re Russia or China.

So what if China invades Taiwan, and I’m not gonna pretend and larp here, like I’m some geopolitical expert and know what Xi Jinping’s gonna do with Taiwan. I don’t know, but I do know that the trend of increasing hostility between the biggest institutions and sovereigns on the planet is going to increase and the trust in this international monetary order that has been built up for the last 80 years since Bretton woods … and post-1971, that order became free-float fiat currencies. It’s this experiment; we’re really only 51 years into it. What happens when all of this boils to head and massive competitive basement and fraying of this international monetary order, which we arguably started to see over the last two years at increasing pace and probably in the next three to five? Bitcoin probably is there.

I’m pretty short term bearish. I think equities have a leg down and that we still haven’t seen the biggest volatility event in this financial meltdown, but on the topic of censorship resistance, I think one of the biggest bull cases is thinking about that geopolitical game theory, looking at why gold itself failed as global money and global money between sovereigns at the biggest level. Why that failed and why that trust, that link, that relationship failed and then look into Bitcoin or look into Ethereum, look into USDC and evaluate every asset on the planet in terms of what’s gonna fill this kind of need: this global need for a neutral reserve asset.

My bet, my conclusion is Bitcoin, but that’s me personally. I guess everyone has to make that decision for themselves, but that’s my thesis here.

@$24551: What The Sanctioning Of Tornado Cash Means For Bitcoin was posted on August 11, 2022. This post may include a link to a website operated by a 3rd party. MegaSheep doesn’t claim to own or represent any of the trade names, products or trademarks associated with any of the linked posts!