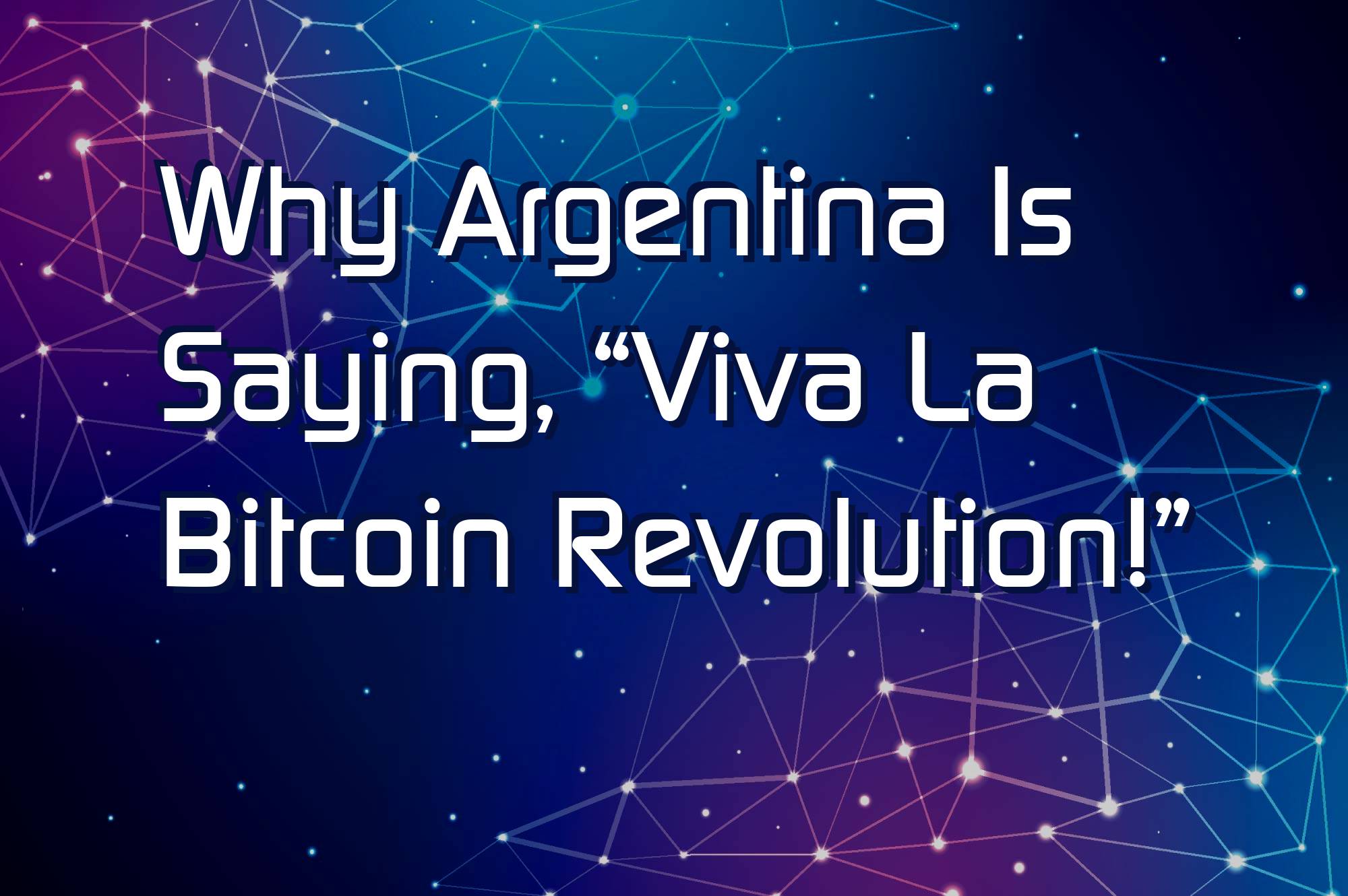 For a country in which hyperinflation has become an expectation, bitcoin is a potential for real savings.

This is an opinion editorial by Samantha Messing, a Brown grad making the world a better place with Bitcoin.

Investing legend and limousine liberal Warren Buffett has never been a fan of Bitcoin. He recently commented:

“If you offered me all the Bitcoin in the world for $25, I wouldn’t take it.”

Of course, Buffett does not get “it.” He is a Nebraska billionaire. The U.S. dollar is the strongest currency in the world. He cannot fathom the possibility that The State might hyperinflate the currency, default on debt or confiscate assets.

For the people of Argentina, financial collapses are their Groundhog Day. Gratefully, Bitcoin offers a trustworthy alternative to their failing national currency and corrupt monetary system. Let’s get into it.

Argentina is facing one of the highest inflation rates in the world … again! The nation has no access to international capital and owes over $40 billion to the IMF. Prices are soaring, and nearly half the population lives in poverty. Economic conditions are as bad as they have ever been … and that is saying something for Argentina.

Successive governments, beginning with the Peronists in the 1940s, have saddled the nation with unwieldy debts. Argentina has gone bankrupt nine times, with more than a dozen cycles of hyperinflation and reform over the past century. No country has a worse track record.

Argentinian inflation is a special kind of inflation. It comes with a lot of zeroes. We are talking millions. What good is a salary of $1 million when bread costs $2 million? Facing political pressure, politicians embrace monetary “reform” which includes a mix of raising policy rates, controlling currency exchange rates or introducing a new currency.

Pretend it is 1970 and you have one million pesos in the bank. Feeling good, right? Here comes monetary “reform.”

“If you keep a peso for too long, it melts in terms of how much you can buy with it.”

On paper, Argentina’s political system is akin to the United States: three branches and popularly elected presidents with four year terms. In practice, checks and balances have been on the decline for decades. Known as “hyper-presidentialism,” Argentine presidents wield far too much power, and Argentina has been poorly governed by both liberals and conservatives.

The seeds of Argentina’s current economic crisis were sown over the last decade. It begins with Former President Cristina Kirschner (now Vice President) pursuing a populist-socialist agenda for her working class base. She spent massively on subsidies and social programs, all financed by foreign borrowing. Public debt soared, and then inflation and interest rates skyrocketed.

Thereafter, center-right President Mauricio Macri took office with promises to revive the economy. However, the peso continued to fall against the U.S. dollar. With capital controls imposed on the populace, Argentines hoarded black market US dollars under mattresses.

At this point, the government should have really stopped spending and reigned in the deficit. But, as we know, austerity dims one’s re-election prospects. So, in 2018, Marci secured a $57 billion credit line from the IMF, the largest in IMF history. Phew.

We know what happened next. The pandemic, Russia’s war in Ukraine, shrinking food supplies and tighter energy markets battered economies all over the world. Few countries were less prepared than Argentina. Soon after the shutdown, the nation defaulted on sovereign debt and inflation hit 70 percent.

This is not the first currency collapse rodeo for the Argentines. Citizens began to accumulate durable goods like homes, gold, technological devices and non-perishable food. They all have one goal: get out of the peso … now!

On payday, Argentines rush to illegal “cuevas” (black market exchanges) to trade pesos for other currencies. These exchanges primarily distribute cash, and this is a dangerous undertaking. Criminals know the game, and muggings are commonplace. Even so, the black market offers a safer bet than the national currency and banking system. Really?

Yes! In 2001, the Argentinian government enacted “el corralito,” denying people access to their bank accounts for almost a year. When the banks reopened, citizens discovered that all U.S. dollars were exchanged for pesos and the peso lost 60 percent of its value. Could this happen again? You bet your ass it could.

No wonder Argentina bred Silicon Valley’s Bitcoin “patient zero,” Wences Casares, who helped convert Elon Musk, Peter Thiel, Reed Hoffman and Chamath Palihapitiya to the cause. Casares grew up in the Patagonia region and watched his family lose their life savings — three times — due to currency collapses. Casares also founded Xapo, the first Bitcoin institutional custodian, which he sold to Coinbase in 2019.

Argentines are increasingly using bitcoin as an alternative to their shitcoin national currency. As a peer-to-peer decentralized network, bitcoin enables Argentines to freely send and receive value to each other and across borders. Importantly, bitcoin is both debasement resistant and seizure resistant. Bitcoin can be securely stored on a USB stick or in your head (if you can remember your seed phrase). Either way, it is much easier and safer than hauling cash from a cueva to an attic.

Government officials, journalists and limousine liberals, like Warren Buffett and Elizabeth Warren, cluelessly deride bitcoin as dangerous and risky. They traffic in Western luxury beliefs with little regard for the needs of the billions of people who live in countries with unstable financial systems.

To be clear — Bitcoin is not perfect. But, even as Bitcoin’s price has fallen (hard) in recent months, Bitcoin remains a superior alternative to the Argentinian peso. In fact, according to this New York Times article, “Nearly 60 percent of Argentines believed that Bitcoin, one of the most popular cryptocurrencies, would retain the value of their savings over that same period…”

Adoption of Bitcoin in Argentina is outpacing Europe and the United States (duh!). The same New York Times article states, “About one-third of Argentines said they bought or sold cryptocurrencies at least once a month, double the percentage of people in the United States, according to a separate survey by Morning Consult.” The nation is a top country for receiving paychecks in crypto, and cuevas now offer exchange rates between the peso and Bitcoin.

Of course, Bitcoin will not cure Argentina’s economic woes and political failure. But, it is a super valuable asset for the people … because it is the only money that Argentine politicians cannot destroy.

These views are my own and are not financial advice.

This is a guest post by Samantha Messing. Opinions expressed are entirely their own and do not necessarily reflect those of BTC Inc or Bitcoin Magazine.

@$19413: Why Argentina Is Saying, “Viva La Bitcoin Revolution!” was posted on September 29, 2022. This post may include a link to a website operated by a 3rd party. MegaSheep doesn’t claim to own or represent any of the trade names, products or trademarks associated with any of the linked posts!